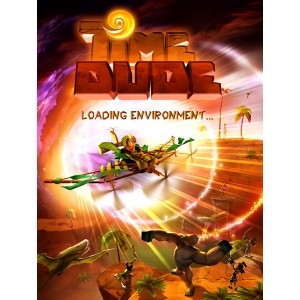 The modern mobile devices have opened a new world for video games. Considering that the power of graphics and processing has been growing, games of high quality showed up to take advantage of the new technologies. One of them is TimeDude, designed as a multiplatform for mobile devices, including those which run on iOS or Android. This game introduces you to the captivating world of prehistoric era, with graphic elements that combine the atmosphere of that period with mystical elements, offering the experience of a fantastic world that waits to be uncovered.

Time Dude is an arcade flying shooter game, pushed to the next level, where the player gets into the part of the main character, John Q. Dude, a venturesome airman erroneously thrown into the distant past by his friend, Professor Klumsy. Thus in this world of animated cartoon, our character needs to make his way through prehistoric human beings, gorillas, mammoths, giants and find a way back to the future.

The game does not request previous experience with other games of this kind, and it has an intuitive control mode. The plane can be handled with only one finger, and it has an automatic firing system. The more enemies are knocked down, the more extra points are won, which can be used to improve the plane with leaves and straws in order to get more speed, an armor or stronger weapons. Furthermore, other possibilities of an improvement show out throughout the game, which help the player to overcome easier the obstacles of the hostile world he finds himself in.

Time Dude is a result of a few programmers and artists’ passion for video games. The project was a true challenge to the team, considering the lack of experience in this field, but the determination and ambition led to this special result. After many months of work, the team managed to combine 2D and 3D elements with sound and music, all this concluding with the achievement of this game and of an undiscovered prehistoric world.

Industry standard programs are used on the technical side. The game was created in Unity3D, an optimized graphic engine. Moreover, the graphic elements were created in 3D Studio Max and Adobe Photoshop. Music and sound were created using FL Studio and the animations using After Effects. The biggest challenge was finding the balance between the use of memory, graphic processor and data processor. Our target is the mobile devices, thus everything must be optimized. Every percent of improvement counts, because the resources are still pretty limited.

Time Dude is available on: