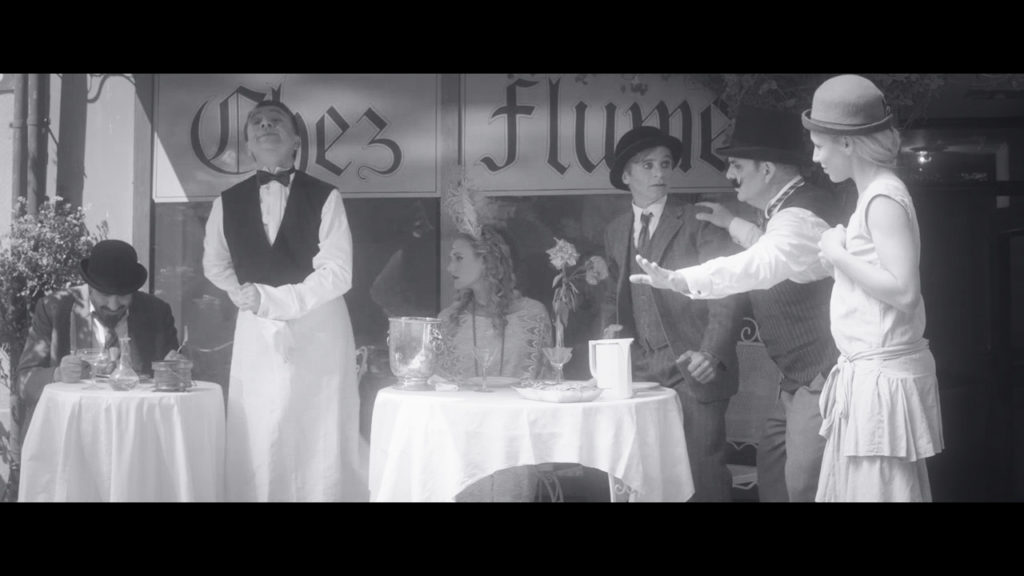 Michael Flume is a producer, director, and actor born in Switzerland. He lived for a long time in the realms of New York, where he became one of the most famous deejays of the 80s, doing disco mixes for a long time. He had the chance to study acting alongside the big industry, after which he focused on directing and film production. From time to time, he also plays roles in the films he produces. He is always open to relating and advising those at the beginning of their career about what film production means and not only, being invited to schools in Switzerland to hold workshops. With a life experience as plentiful as his, if you’re lucky enough to meet him, it’s impossible to stop asking him questions.

An extremely positive and open to challenges character, Michael Flume visited us to work with the Republic Production team on the post-production of the silent short film he wishes to submit to the Locarno Film Festival. Discover more details in the interview below.

You have a very interesting life story.

I’ve lived many lives. Crazy stuff. Yes, yes, deejay. But so many other things…

Well, I have a friend who worked with Dan who was here and they told me about you. They always said that there’s so many people, very talented and very creative, and I like creative people so I took a risk and I came here. I flew here to finish one of my film projects.

Can we talk about what we are working on together?

I made a film, a very special film. It’s a black and white sound movie film, the style of Chaplin and Buster Keaton. I filmed it last year and it is styled with music. It’s a 30 minutes short film which is meant for short film festivals. It really came out very nice. It was filmed in my home town, I changed most of my home town with mustache and small cars, into 1920. I wrote the story, I wrote that typical Chaplin story with the mean guy, the unlucky artist, the impossible love of the beautiful girl who has to marry the mean guy and the whole thing. So hopefully this film will be finished within the next couple of weeks and at the beginning of June it should be done. If I’m lucky, I’ll probably be able to show the movie in the ‘Locarno Film Festival’ in August and that’s one of the biggest ones in the world. That’s like the step before the Oscars.

It’s such a special film and it hasn’t been done for many, many years except, of course, the one that Hollywood made but for me that was too beautiful, too perfect. I like the dirt. So, I think this can make a lot of noise, I think people will enjoy it and specially because it is a silent movie, everybody understands and they have text in between, we can always change the language you can make it in Hebrew or in Arabic or in Greek or whatever, in Chinese, Japanese and send it to the festivals. So that’s the plan, it’s not gonna be a project which makes money, it’s a project which costs money, but it’s a project like a business card, sometimes it’s important to work for free to get the next project going. So that’s what this is all about.

How did you start directing and producing? 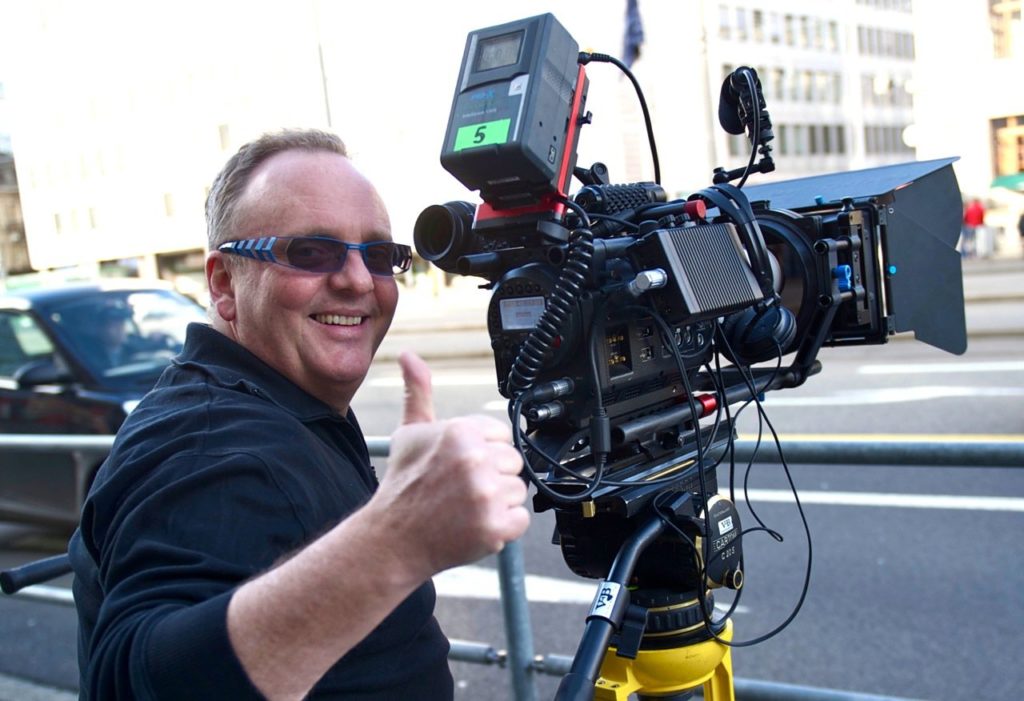 But you are not doing it all alone, is it? You have the team.

I have a team, I mean, at the beginning you are alone. The first 50% you are alone. And then, if you are lucky, you find somebody like you. For example, you are very good at organizing and they can help but you still are the one who has to say ‘yes’ or ‘no’. Even they tell you ‘look I found this location’ you still have to go look at it and say ‘no, I don’t like it too much, let’s try another one’. I mean we filmed the most of the film in a small farm which is in the middle of city of Basel . We were able to film 80% there and this helped a lot. But even there you have somebody to go look for locations and they found two places I didn’t like so you have to do it yourself but you have somebody helping you, of course.

This project I did is so complicated because it’s 1920 and every little thing, your jacket, every detail, even the numbers of the buildings, they changed it so it looks like 1920. Those people who did this for me got up at 4 o’clock and did everything. So when I came on the set, like a big producer, director, a little later of course, with the coffee in my hand, they were there working for four hours getting everything ready.

So, team work, it’s very important to find the right team but if you don’t find the right team you can do it also. I mean I’ve done work where I go with my bicycle, two cameras and two stands and have one camera in one hand and the other camera in the other hand and here have the microphone. You can also do one man productions. It’s good, it’s great, I mean for me it was for the first time I had a real team. If not, I do everything by myself. It’s a little egoistic but I have to be happy with myself. And editing is a big part of course, the sound is a big part, it’s filmmaking. Filmmaking is everything. And I was very lucky to also be an actor so I can see it from the stand part of the acting. So it’s good, I like it.

Can you tell us more about your future plans?

Well, there’s a few movies I have in mind, but the next one it’s gonna be a comedy, also where a very crazy family from Kosovo is moving into a very straight Swiss town and…very funny stuff. So, I already went to Kosovo to make some auditions and they went fantastic, 120 people came. I thought maybe 20. I think all Kosovo came. And I’m here now and I see all those beautiful buildings and I like when it’s a little bit broken too, and the beautiful people. Maybe I can make a movie here.

No, I mean if I will come do a movie here, we will be working together, I’d love to.
Reea, I’m very impressed, very, very impressed by how many people work here, creative people and I feel home, you really make me feel at home.

I’m glad to hear that.

Are you planning to visit us in the future, are you coming back?

I’d like to come back, maybe I get married here, who knows? (laughs). It’s only a few hours away from Basel so why not? I’ll come back. I think Dan, the big boss, he would be interested also, maybe do some workshops here about acting, about filmmaking, which I do a lot in Switzerland. I go to schools and talk to young people about my experiences in New York, about the surviving, about how you really get jobs and how you should present yourself, etc.

Are you satisfied with our team’s work?

I am satisfied, yes. Like I said, what I brought here is so different and so new, so even for you guys it’s learning by doing. You haven’t done it before, what I need. So it takes a little more time but they’re really working non-stop and hopefully we get this right. They work hard and there’s a good team and I think we get something very special on the road. 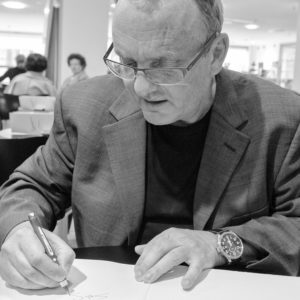 From Michael, we also learned that you shouldn’t be discouraged by refusals and that you can learn a lot by yourself, through exercise, which greatly contributes to the brightening of the horizon on your way to success.

Michael: ‘There are also people out there who are creative and have ideas. Maybe just their life is a little complicated and they cannot do and learn and go to school. You can teach yourself. Everything I’ve done, except the acting, I went to school, but everything else is learning by doing. These days we are lucky we have YouTube. If you have to use a software for editing, Adobe Premiere or whatever, then you can look at the menu out there and learn it yourself. So don’t give up just keep your brain, write your ideas down and also don’t be discouraged by ‘no’. If people tell you ‘no, no you should do something else’ you smile and say ‘I know, I know’ but you continue your dream, is you, it’s only you, you, yourself and you, there is nobody else inside of you. So you can do what you want and you will do it yourself and nobody else will. They have their life, you have your life, so really continue, creative people, is very important. So, continue your dreams and it’s not for nothing, you have to work but dreams do come true if you work hard.’