As we mentioned in the previous article, the idea of developing a platform that can help students write easier and faster came up due to a problem that one of the founders’ brother encountered. After helping this family member finish the semester, Saad and Lee decided to leave their corporate jobs to help youngsters unveil the mysteries of writing. It wasn’t really easy at the beginning. Getting Citelighter on its feet was a true challenge in the USA. Below you can read an interview with Lee Jokl, one of the founders, and Jonathan Ceresa, the company’s CTO.

What difficulties have you encountered?

Lee Jokl: There is obviously a challenge in the United States. There’re a lot of public schools and the people that you will be selling your product to don’t have a lot of money. So it’s always challenging to get them to pay for your product. It’s also difficult because the people that use Citelighter, which are the teachers and the students, are not the people that make the decision as to whether or not they want to buy Citelighter. So you have to make a product that works really well so that teachers and students benefit from it, but then you also have to build a team that can help actually convince the decision makers to want to purchase it. That’s been a challenge and just something that we had to learn. People don’t typically see education companies as a good investment because it doesn’t grow very quickly, education is a slow moving market, and it’s not terribly sexy. This platform is an incredible piece of technology that is changing people’s lives and giving them the opportunity to become, journalist, or just learn how to write; things that they wouldn’t necessarily otherwise be able to do, Citelighter teaches them. It changes their lives and that matters most to us. We have people all over the US here. John in New York, we’re in Baltimore, Maryland, we have a salesperson out on the West Coast and we work every day with the team in Iași and Tîrgu-Mureș, with a seven hour time difference. So there’s always challenges that you have to work through and creating efficient communication, making sure that what we are building is what the market wants, trying to do it on time and, we’ve made some mistakes along the way but, like I said, the Reea team has been a real partner to us and has helped us every time, without question.

Jonathan Ceresa: I have to say that the Reea team has been a really huge benefit to us when starting this company. A start-up company is, by its nature, volatile, and also unpredictable. So, a lot of our investors who understand the importance of what we’re trying to do, are in for the long haul with us and having a partner like Reea, and Dan, who’s worked with us countless times, is invaluable to us because he truly understands the ups and the downs.

Lee Jokl: It’s transformative, our goal is to transform students’ ability to be effective writers, so I’d say that we’re transformative. I think that engaging is another good word to describe Citelighter. I feel that we’ve built an engaging product that people of all ages want to use and I’d also say flexible. Flexible because, like I said, you can use it when you’re eight years old, you can use it when you’re 38 and it will still benefit you in your own way.

Jonathan Ceresa: I would say the learning curve was difficult. We have a language barrier, that is a challenge, but I would say that there was definitely a learning curve to our teams actually being able to work as efficiently as possible. We both came into it, really giving 100%, really trying to make sure that we put out a good product, efficiently. I would say it took a little while to get our processes in place, for us to all really get our culture together and in the same line, and to really understand the common goal that we are trying to achieve. But once we did that, we really consider Alin and Romică and the entire Reea team as part of our company now.

Lee Jokl: I just wish we can see these guys more. I had the opportunity to go over and actually attend Alin’s wedding two years ago in Iași and meet the whole team and see the office, and it was awesome. It really was one of my best memories of my life. I wish we get to do that more, I wish Jon would get a chance to meet them in person, I wish that they were able to come here because being able to meet them personally is much different than just knowing somebody’s voice on Skype, or talking with him through email. It helps with team-building and things like that, however, I have to say that these guys know how to make it feel like you’re right next to them. They are super responsive with everything you need, they do such a good job with the communication that they help you overcome that the location challenge. It did take a little bit of time for us to really understand how to build such an effective relationship, because we were new at this and it’s a little bit different than what we were used to working with. However, now that we figured it out it’s like they’re sitting right next to me. I can always chat with them or I can call them at any time of the day. 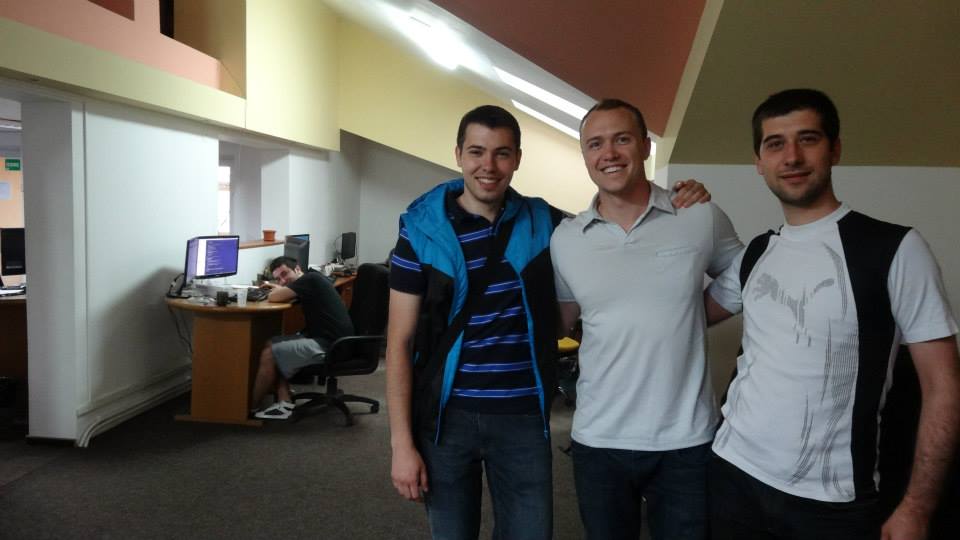 How does a typical work day look like for you?

Jonathan Ceresa: The typical work day starts where I wake up and I actually go through a lot of the emails that have been sent to me by the Reea team and by the Baltimore team, looking over communication that has happened throughout the night because the bulk of development is done while the US is sleeping. And by the time I wake up, the Reea team is winding down. At the beginning that posed a lot of challenges but once we were able to really understand the benefits of doing this type of model and working in this way, it really started to shine and produce the kind of output that we would get if we were working alongside developers here in the US, if not better! For the sole reason that we’re getting almost twice the productivity out of one day. When the development team is finished, I can then review all the problems and challenges from the day. Every single day we get on a call, we call it our scrum call, and we’re able to talk about what happened through out the day, any issues that came up, what was solved, what wasn’t solved, how are we doing with our time frames, everything pertaining to the business, everything pertaining to the development side of the product. And that level of communication has given me the ability to sort of extend my productivity throughout the day because then I know what I need to do to have everything ready for the team before I finish my workday so Reea can function at 100% the next day. I need to make sure I have everything in line so that my team has everything they need in order to be successful. So in that way it’s giving me more time in my day to give my team what they need. If we were working on the same schedule it would be hectic and I wouldn’t have the time to actually give them quality responses and feedback.

Jonathan Ceresa: I guess it’s corny but I really like our team, I like the company that we’ve built, I like the people that I work with…I speak to Alin and Romică and our development team in Romania and the folks in Baltimore more than I speak to my own family. It’s like a second family and they are important to me and making sure that they have what they need to succeed is very important. Making sure that they’re doing well and they’re happy and are healthy is important. So I would have to say the team is what really keeps me going, it’s what wakes me up and makes me stay late and that is what’s important.

Lee Jokl: For me, in addition to what Jon said, I really have enjoyed seeing where we were as a team, and as a technology, when we started Citelighter, what the idea was, to what it is now. Jon and the Reea team deserve to take a lot of pride in this, as they have overseen the transformation of something that was a really basic idea with a really basic piece of technology to something that’s extremely comprehensive and complex, and which has the ability to do a lot of things to help students. It’s been really cool to see that evolution and that’s something that I take pride in, and which they should too. It’s like watching something grow that you have direct influence over. That’s something I really enjoy on a daily basis. We get especially excited when there are new releases; we do deployments on Mondays and Tuesdays typically, and that’s always exciting. We love to go onto the platform right after the latest release and seeing what’s new, playing with that a little bit, knowing how it’s going to improve the lives of our users. It’s really marvelous to see all that we’ve built.